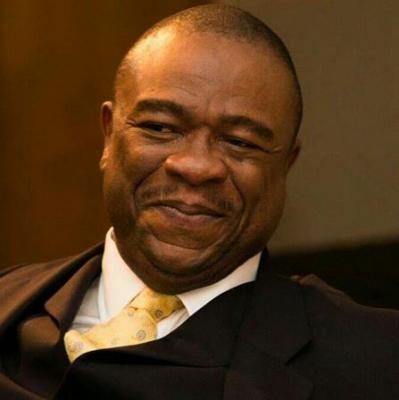 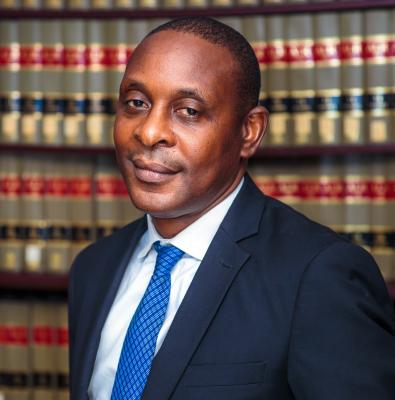 He is a law graduate of Obafemi Awolowo University Ile- Ife and was called to the Nigerian Bar in 1990. He has been in active legal practice since 1990. He joined B.A LAW LLP in 2004 as an Associate Counsel now an Associate Partner. A seasoned litigator. Specializes in Election Petition, Arbitration, Debt Recovery, Commercial and General Litigation, Maritime Law, Banking Law, Taxation and Insurance Law. He has successfully represented a broad range of clients ranging from local to International Corporations in diverse matters. He is a member of the International Bar Association and the Nigerian Bar Association. He is also an Associate of the Chartered Institute of Arbitrators (UK).

Adenrele’s Litigation profile has been on the rise and he has recently been involved in the following Appellate cases:

Judgment delivered by Court of Appeal Lagos on 16th of February, 2017

Judgment delivered by Court of Appeal Lagos on 23rd of March, 2017

Judgment delivered by Court of Appeal Lagos on 24th of February, 2017

Judgment delivered by Court of Appeal Lagos on 18th of May, 2017

Judgment delivered by the Supreme Court of Nigeria

Judgment delivered by the Court of Appeal on 23rd April, 2008.

• REGISTERED TRUSTEES OF THE CHURCH OF JESUS CHRIST OF THE LATTER-DAY SAINTS V. AKIPS NIGERIA LIMITED

Judgment delivered by the Court of Appeal Ibadan on the 20th of February, 2015.

Judgment delivered by the Court of Appeal, Ibadan on 25th March, 2015.

Judgment delivered by the Court of Appeal, Lagos on 22nd March, 2016.

Judgment delivered by the Court of Appeal on the 7th of December, 2015

Akinlabi Apara is Managing Partner and the Head of Chambers of the firm. He attended Olabisi Onabanjo University where he obtained his Bachelors Degree in Law. He is highly experienced in litigation, commercial law practice and labour Law and is versatile in land disputes. He is also a certified negotiator and mediator and is an Associate of the Chartered Institute of Arbitrators in Nigeria.

Ajibola Ariba is a Senior Associate of the Firm. He attended Mayflower School, Ikenne, Olabisi Onabanjo University, Ogun, Nigerian Law School, and the University of Lagos.

He joined the firm in 2011 as an Associate, although he had earlier done his internship with the firm in 2008 before he proceeded for his NYSC and the Nigerian Law School in 2009. Ajibola also acquired some experience with Chief Gani Adetola Kazeem SAN & Co. in his early days of his career in 2010 before joining the firm.

In 2007, he wrote on ‘The Nigerian Stock Exchange and its Legal Perspectives’. Ajibola has also published two (2) Law Books in 2012 and 2014 respectively, in contribution to the development of the Law in Nigeria.

He has his interest in Civil Law, Criminal Law, Corporate and Commercial Law, Property and Land Law, Tax Law, Labour Law, Banking, Capital Market/ Investments and Securities Law, and has a passion for Lecturing. Ajibola has also worked as a junior Counsel on a few Pre and Post Election Petition Matters, Chieftaincy Matters, and Maritime Law Matters to mention a few.

Ajibola’s aspiration is to rise to the Inner Bar.

Ezenwa attended Premier Primary School and Township Comprehensive College, Orlu Imo State, for his primary and secondary school education respectively. Thereafter he proceeded to the University of Nigeria, Enugu Campus where he graduated in 2009 with Bachelor of Laws LLB (Hons). He was called to the Nigerian Bar in 2010 having attended the Nigerian Law School, Enugu Campus for his Bachelor of Law (BL) same year. He did his mandatory National Youth Service in 2010-2011 in Kano at the law firm of C. A. Adolor & Co. 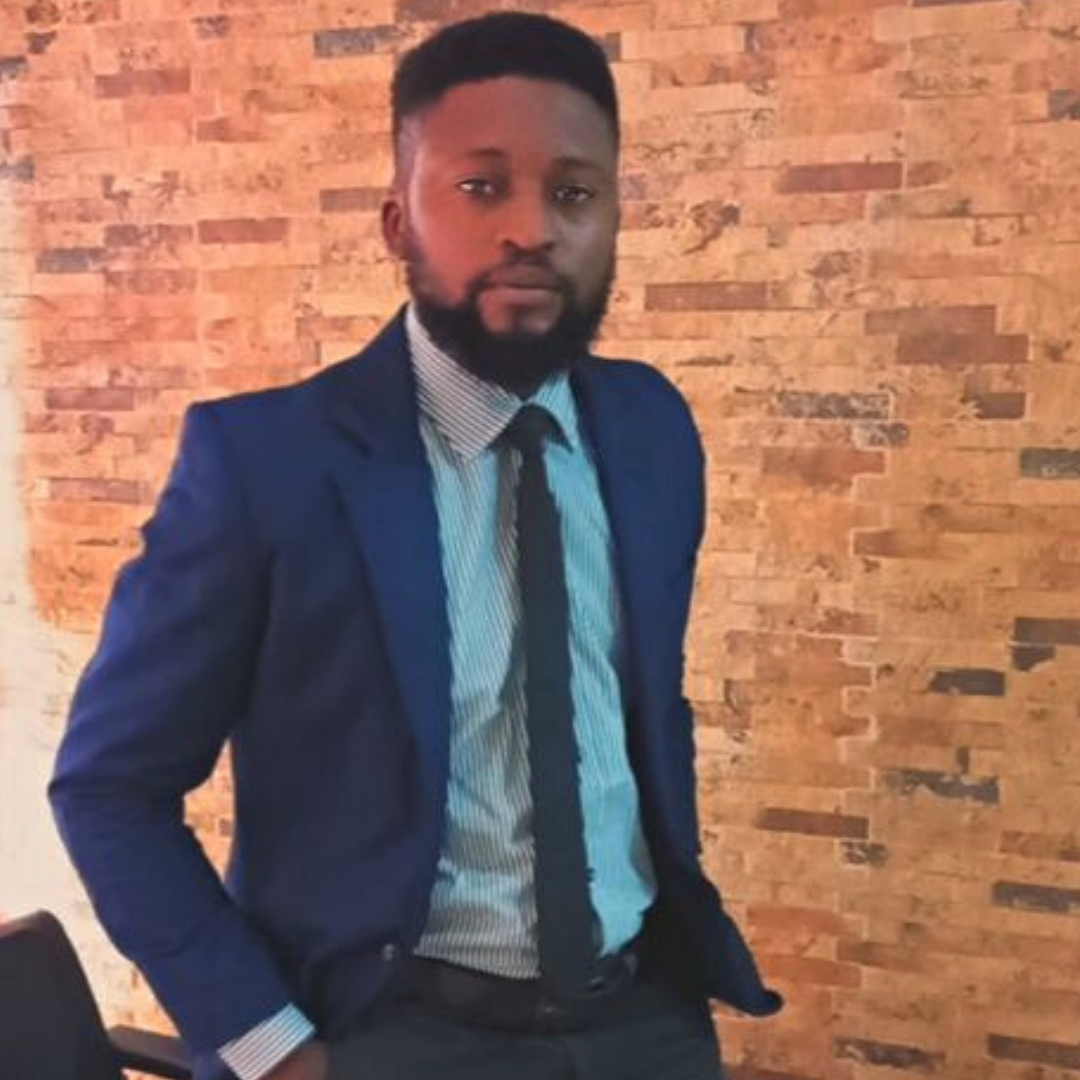 He worked as an Intern in P.C.P Ezeani & Co in 2008, 2009 & 2010 until he was called to the Nigerian Bar and continued to work as a Junior Partner after he was called in 2012 and for which he left sometimes in December 2014. He also worked and practiced as a full Legal Practitioner from March, 2015 with the firm of Messrs. A. Muoka & Co. (An Intellectual Law Firm of the most Senior Legal Practitioner and a Former Chairman of the Nigerian Bar Association – Lagos Branch) – which he left in June 2016.

He joined the firm of Messrs. B.A. Law LLP in June 2016. He is a Member of the International Bar Association and the Nigerian Bar Association (Lagos Branch – The Premier Branch). His core expertise is in the areas of: criminal litigation, civil litigation, corporate and commercial law, banking and insurance matters, debt recovery, alternative dispute resolution matters and real estate documentation, property title perfection and undertakes due diligence searches. 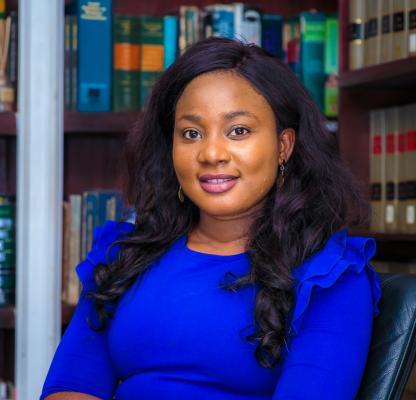 Gold studied Law in Madonna University, Okija, where she obtained her Bachelor’s Degree in 2010 and was called to the Nigerian Bar in 2013. She has since been in active practice. She has passion for Litigation and Alternative Dispute Resolution generally with interest in Criminal Litigation, Commercial Law, Company Law, Legal Drafting and Conveyance.

FRANCISCA OLUREMI DAWODU is a Senior Associate with the firm. She attended the University of East London, England
where she obtained her Bachelors Degree in Law in 2010. She was called to the Nigerian Bar in 2012 and bagged her Masters Degree in Oil and Gas Law from the prestigious Robert Gordon University, Aberdeen, Scotland in 2014. She has authored a book on Divestiture of Upstream Oil and Gas Assets by IOC’s in Nigeria which was published in Germany. She is a member of Middle Temple’s Inn in the United Kingdom. She has interests in Taxation, Oil and Gas Law, Dispute Resolution, Corporate and Commercial Practice and Alternative dispute resolution. 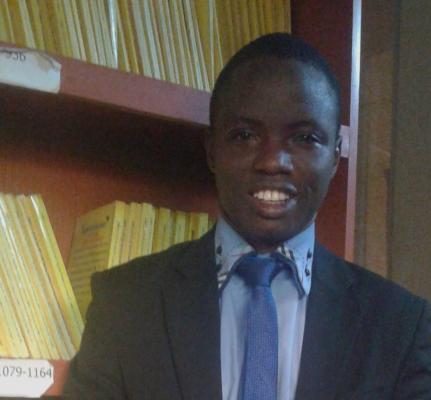 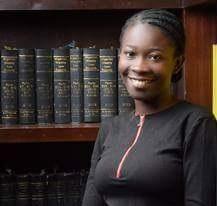 She graduated from Madonna University,Okija,Anambra State and was called to the Nigerian Bar on the 21st of October 2015. She is a member of the Nigerian Bar Association,Lagos Branch. Her core expertise is in the areas of civil litigation, commercial litigation and alternative dispute resolution matters.

Temitayo Ayorinde is an associate member of the Firm.

After obtaining an LLB 2013 and receiving his call to the Nigerian Bar in 2016, he has pursued a career in Dispute Resolution.

Receiving further training in Venture Capital and Private equity, he has been able to effectively advice on complex commercial transactions in Tech finance, Entertainment Law agreements and Intellectual Property Protection. 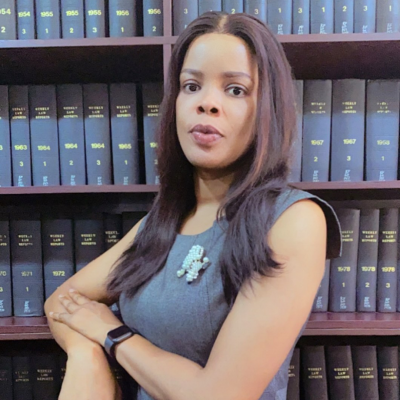 Precious is an Associate counsel of the firm. She has actively pursued her legal career upon being called to the Nigerian Bar in 2016. She is an active member of the Charted Institute of Mediators and Conciliators of Nigeria.

Since joining the firm, she has been involved in a wide range of matters, including general corporate advisory, Alternative Dispute Resolution and litigation. She is a Corporate Transactions Enthusiast with specific interest in Immigration Law, Alternative Dispute Resolution, Matrimonial causes and Family Law, Corporate insolvency, Aviation, Labour and employment, Corporate Governance, Tele-communications, and real estate matters 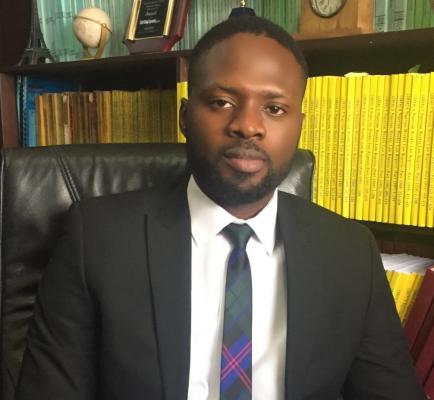 Soladoye Lanlehin is an Associate at BA LAW LLP. He has a Bachelor’s degree in Banking and Finance from Covenant University, Sango Otta and also holds a Master of Professional Ethics degree from the prestigious University of Ibadan, Ibadan, Oyo State.

He bagged his law degree with a Second-Class Upper Division from the University of Buckingham, Buckinghamshire, England. Soladoye became a member of the Nigerian Bar Association after been called to the Nigerian Bar to practice law in Nigeria.

He is an experienced Associate with a demonstrated history of working in the legal services industry. He is skilled in Banking and Finance, Alternative Dispute Resolution, Commercial Arbitration, Capital Markets and Strategic Planning. He is an avid reader and an enthusiastic researcher. He currently resides in Lagos, Nigeria. 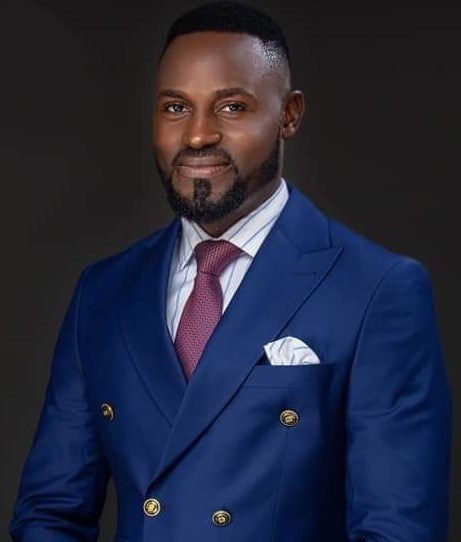 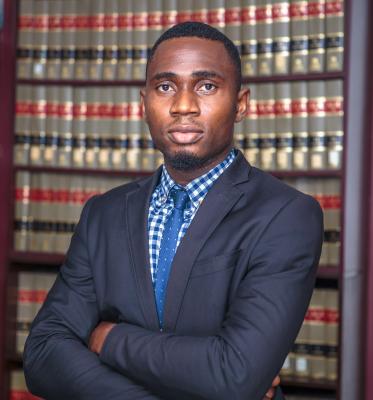 Semilore Oluwatayo is an Associate in the Firm. He holds his LLB from The prestigious University of Lagos. ’ He became a Member of the Nigerian Bar Association after been called to the Nigerian Bar in 2018.

Temiloluwa Tayo-Tiwo is an Associate in the Firm. He holds a Bachelor’s degree in Economics from McMaster University, Ontario, Canada.He received his law degree with a Second-Class, Upper Division from the University of Buckingham, Buckinghamshire, England. He has also obtained a Masters’ Degree in International and Commercial Law, with a specialization in Oil and Gas Law from the University of Buckingham. He became a Member of the Nigerian Bar Association after been called to the Nigerian Bar in 2017.

Since joining the firm, he has been involved in a wide range of matters, including Litigation and Alternative Dispute Resolution. He also maintains particular interests in Corporate Commercial law, Matrimonial Causes, Entertainment law, Intellectual Property Practice, Labour and Employment law, Real Estate Matters and Oil and Gas Law. 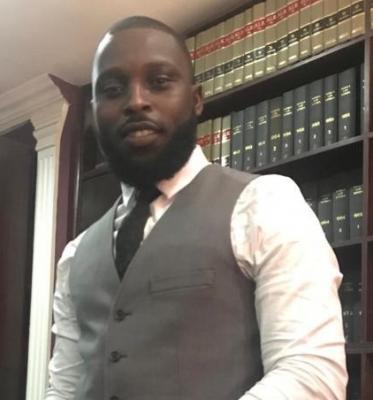 Adeyinka is an Associate in the firm.

He attended the Lead City University, Ibadan where he obtained a Bachelor of Science (B.sc)(Hons) in Politics and International Relations in 2012.

After a year of National Service, he proceeded to the University of Northampton, United Kingdom where he graduated with a Bachelor Degree in Law (LLB)(Hons) in 2015.

He also obtained a Masters of Law in International Commercial Lawfrom the University of Northampton, United Kingdom in 2017. 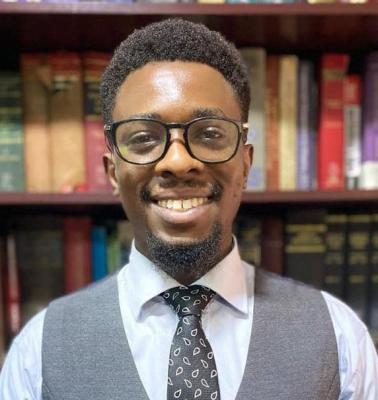 Semilore Oluwatayo is an Associate in the Firm. He holds his LLB from The prestigious University of Lagos. ’ He became a Member of the Nigerian Bar Association after been called to the Nigerian Bar in 2018. 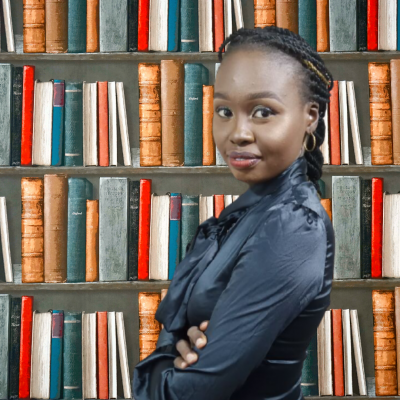 Adedamola Oladapo (ACArb) is an Associate of the firm.

She graduated from Obafemi Awolowo University, Ile-Ife, Osun State. She is also a member of the Nigerian Bar Association.

She interned with Kunle Fadipe & Co in 2012, Wole Olanipekun & Co in 2017. She also garnered experience in Intellectual Property law in G.O Sodipo & Co and Simmons Cooper partners in 2019 before joining BA Law LLP in December 2019.

Onaopemipo Oguntayo is a graduate of the prestigious University of Lagos, called to the Nigerian bar in 2019. She is certified Conciliator and Mediator.

Since joining the firm, she has been involved in a broad range of Legal practice cutting across; Alternative Dispute Resolution, Employment and Labor law, Matrimonial causes, as well as Commercial law practice. She also maintains peculiar interests in Intellectual Property and Real Estate. 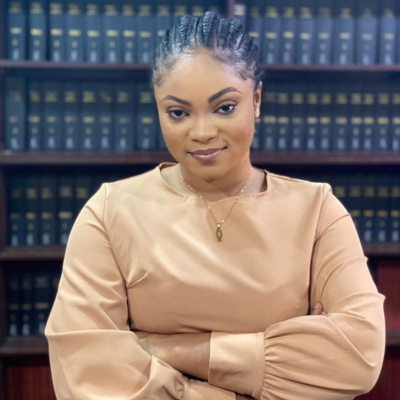